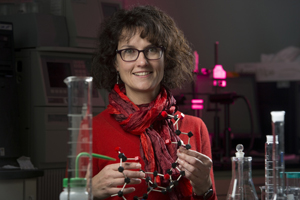 Professor Kathryn Uhrich, a renowned polymer scientist, has been named a Fellow of the American Chemical Society (ACS), the world’s largest scientific society. Uhrich, a Plainfield resident, will be honored during the ACS 248th National Meeting & Exposition in San Francisco on August 11.

A CCB faculty member since 1995, Uhrich leads a Rutgers laboratory that designs biocompatible and biodegradable polymers for medical, dental and personal care applications. She has trained over 160 junior and senior scientists in polymer chemistry and generated nearly $30 million in federal and corporate funding. Uhrich is the former Dean of Mathematical and Physical Sciences in the Rutgers School of Arts and Sciences.

“Throughout her career, Kathryn Uhrich has been a leader in the advancement of science with many innovations and patents in biomedical materials and drug delivery,” said CCB Chairman and Professor John Brennan. “Many students come to Rutgers from all over the world to benefit from her vast knowledge and expertise. Kathryn is a tremendous role model for our students and we congratulate her on this very well deserved honor.”

Among many distinctions, Uhrich has received the Common Pathways Award from the New Jersey Association for Biomedical Research, ACS Buck-Whitney Award, Dow’s Turner Alfrey Visiting Professorship and the Thomas Alva Edison Patent Award from the R&D Council of New Jersey. Uhrich is a Fellow of the American Institute for Medical and Biological Engineering, National Academy of Inventors and a Fellow of the ACS Polymer Division. Uhrich earned her Ph.D. and M.S. in Organic Chemistry from Cornell University and B.S. in Chemistry from the University of North Dakota.

“The scientists selected as this year’s class of ACS fellows are truly a dedicated group,” said ACS President Tom Barton, Ph.D. “Their outstanding contributions to advancing chemistry through service to the Society are many. In their quest to improve people’s lives through the transforming power of chemistry, they are helping us to fulfill the vision of the American Chemical Society.”

The ACS Fellows Program recognizes “members of ACS for outstanding achievements in and contributions to Science, the Profession and the Society.”