Structured with two concurrent sessions and spanning 3.5 days, the event features a multitude of opportunities for networking, plentiful speaking slots for selected early-career scientists, and unique workshops for students AND educators.

The Protein Society held a poster competition at its 31st Annual Symposium to recognize the top undergraduate and graduate student abstract presenters. Each winner received a check in the amount of $250. 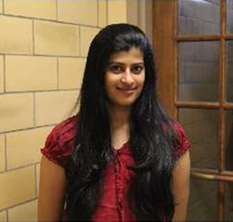 "Illuminating the Specificity Landscape of a Viral Protease using Computation and Next Generation Sequencing."

Proteases are central to the processing and transfer of biological information1. Viral systems encoding proteases need them for precise cleavage of the polyprotein during replication and viral assembly2 e.g. HCV NS3 protease. 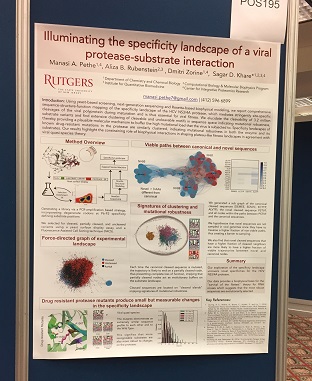 We mapped out the specificity landscape of the HCV NS3 protease to obtain a comprehensive understanding of the protease–substrate interaction network. We used an in vivo yeast surface display4 assay in order to isolate populations of cleaved, partially cleaved, and uncleaved substrates using Fluorescence Assisted Cell Sorting. These populations were analyzed using NextGen Sequencing technology and computational modeling using Rosetta and Amber packages.

Through generating force directed graphs of the library we discovered that the partially cleaved sequences act as “pit stops” in the evolutionary trajectory from functional substrates to non-functional substrates. We were able to reconstruct the entire (3.2 million sequences) HCV NS3 substrate landscape learning from the sequences identified in our experiment, using a SVM5 based approach to predict and validate sequences that lie in the network. We further explored the influence of prevalent Drug Resistant protease mutants (R155K, A156T, D168A and the triple mutant)6 on the substrate specificity landscape.

This study deepens our understanding of the robustness of the protease- substrate landscape and also paves the way to creating designer proteases.