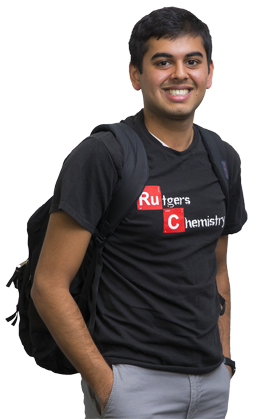 Major(s) and Minor: Chemistry and Mathematics

His Chemistry Major Paved the Way to Medical School

Ankur Dalsania was always strong in science and math.

Arriving at Rutgers as a first-year student, he chose chemistry and chemical biology as his major because he felt the field offered the widest scope of possibilities.

“I thought chemistry would be a great major for me because of the way it combines biological and physical sciences,” he said. “It’s right in the middle and you could go in either direction.”

After graduating in 2017, Dalsania decided to pursue medicine. He’s attending Rutgers New Jersey Medical School and considering taking up such challenging specialties as radiology or cardiology while maintaining a strong interest in research. As he weighs the possibilities, he’s feeling grateful for his Rutgers chemistry experience.

“Chemistry afforded me the possibility of keeping many options open,” he said “And it trained me well for whatever my future may hold, whether it’s clinical, research, or a combination of both.”

Indeed, Dalsania enjoyed an eclectic range of experiences as an undergraduate chemistry major. He started doing research as a sophomore, working with Professor Deirdre O’Carroll, examining light-generating and light-harvesting processes in semiconductor materials and nanostructures.

“She’s a great mentor who puts in a lot of time with her students, including undergraduates,” Dalsania said. “I basically inherited a project that a graduate student had started, making thin-film devices for use in organic lasers or LEDs.”

The research led to the publishing of a paper—with Dalsania as the lead author— in the Journal of Materials Chemistry.

“I like the mysterious aspect of research,” he said. “You never know exactly what you are going to find. You feel like you’re pushing the boundaries.”

Other experiences included serving as an undergraduate teaching assistant, a position in which he essentially served as a teacher for 24 students in a lab class. He also travelled to China to take part in a research project at Jilin University.

He found time outside the lab and classroom to help build up the student chemistry community, serving as president of the Rutgers Chemistry Society. The group holds activities for chemistry students, and also organizes events for the entire campus, such as its Halloween pumpkin lighting, in which members used special salts to make the fire burn in different colors.

Looking back, Dalsania recalls how in high school he worried that Rutgers might be too big. He now believes that the depth of resources was a key ingredient in his undergraduate experience.

“There are so many things going on at Rutgers in terms of research, challenging courses, and activities,” he said. “Whatever you are looking for, you can find it here.”