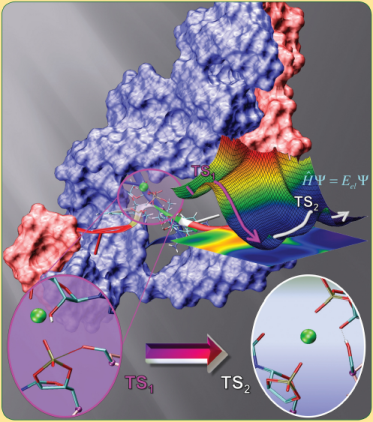 It is a fundamental question as to how molecules of RNA, with its limited chemical repertoire of fairly inert nucleotide units, are able to form biological catalysts that can speed up reaction rates by 10 million-fold or more. The answer to these questions have implications into the origins of life itself which may well have started from ribonucleic acids in an RNA world.

In very recent work from the York lab, the mechanism of cleavage transesterification catalyzed by the hammerhead ribozyme, an archetype catalytic RNA, was deduced from 100 ns combined quantum mechanical/molecular mechanical simulations. Multidimensional potential of mean force profiles were used to determine the minimum free energy pathway for the reaction and identify an active role of a Mg(II) ion in the chemical steps of catalysis. These results provide deeper insight into the mechanism of RNA catalysis.