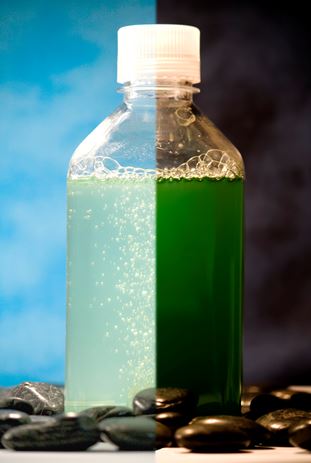 Photosynthetic organisms use several strategies to cope with vast solar flux intensity differences based on seasonal changes, time of day and weather conditions. Given too much light, the photosynthetic apparatus produces damaging radical species, while not enough light leaves the organism starved for chemical energy and stunts growth. Photosynthesis at very low light flux is particularly challenging, as the usual coping mechanism – increasing the pigment antenna to reaction center ratio by synthesizing more antenna pigment or protein complexes – requires more chemical energy to be spent, not less. This paradox has been resolved in some cyanobacteria that have developed an alternative strategy. Under low light conditions many cyanobacteria use a standard version of the D1 reaction center protein subunit (D1:1) of Photosystem II (PSII), the complex that uses sunlight to convert solar into chemical energy by making its own fuel. It does so by transferring hydrogen atoms from water to plastoquinone molecules, while producing a proton gradient (a form of stored energy) and oxygen as byproduct. However, when the cells are exposed to a stress such as even moderate light intensity, a more robust D1 isoform (D1:2) is produced and preferentially incorporated into PSII. D1:2 protects cell from the consequences of high light flux: both radical damage and aberrant photochemistry. The D1:2 isoform is so useful that eukaryotic phototrophs (all algae and higher plants on earth) only contain this version in their genomes. At low light, they must divert resources to increase their relative antenna size, which may result in survival, but severely stunts growth.

Why then have cyanobacteria maintained the seemingly inferior D1:1 isoform over billions of years of evolution and, equally enigmatic, why is it the dominant version expressed under normal light conditions? In a recent paper in The Journal of Biological Chemistry, researchers at Rutgers University and the University of California, San Diego have shown that D1:1-PSII is not only more efficient at converting solar to chemical energy at very low light intensities compared to D1:2-PSII, but also grows faster. Their research shows that D1:1-PSII extends the lifetime of the transient chemical intermediates that form the charge separated state in the reaction center, the first “electrical battery” of photosynthesis. The authors show that transgenic algal cells containing only the cyanobacterial D1:1-PSII accumulate more biomass than cells containing only cyanobacterial D1:2-PSII or the native algal D1 isoform, at very low incident light flux or in dense cultures where cells self shade. This discovery not only answers an important question in the evolution of photosynthesis, but may open the door for applications in the commercial growth of high density biofuels and agronomic crops.